The study of housing acts, reports, manuals, design guidelines, policies, and regulations reveal their collective impact on housing provision and key moments in the formation of the housing market. It highlights significant historical changes in how ‘universal’ housing ideals were implemented. This is analysed in the context of housing in London, which differ in its characteristic from other parts of England.

There has been a historical shift in focus of housing policy from general public health concerns to specific design problems linked to space standards and home use that take into consideration the daily routines and lifecycles of family households. More recently, less tangible design drivers such as sustainability or social value and wellbeing have come to the fore. These changes in policy focus were underpinned by health, social, and technical research whose evidence base has informed changing spatial reasoning and housing design. The interplay between socio-cultural transformations or ambitions and measurable assessments has been formative to housing design standards.

In England, housing reports have been important milestones for new housing acts and design guidelines starting with the Tudor Walters Report (1918). England’s best-known space standard, deriving from the Parker Morris Report (1961), saw an important shift to non-standard and evidence-based, ‘scientific’ reasoning. While the report returned to the provision of numerical values and recommendations of minimum standards, it paid particular attention to notions of usability and flexibility. The abolishment of the Parker Morris standards in 1980 marked a significant reduction in government intervention. Space standards soon dropped by 5 to 15% and the marketisation of housing resulted in ‘public housing’ – accessible widely to the population – making way for ‘social housing’ that only provides accommodation to those not served by the market. Space standards in England are now significantly lower than those in continental Europe. However, there are not only critical shortcomings of space standards in some sectors but also in building regulations.

From a qualitative to a quantitative assessment of housing, today we see again a cyclical shift towards more qualitative assessment criteria, linked to issues of wellbeing, social value, and, as the most recent government housing report Living with Beauty: Promoting Health, Well-being and Sustainable Growth (2020) demonstrates, ideas of style. However, current housing policy also shows a fundamental disconnect between housing delivery, supply, and quality assessment from architectural design values, as regulations and standards rely largely on quantifiable performance requirements in which spatial design is of little importance.

There is a lack of more data-driven and evidence-based approaches to the analysis and evaluation of housing outcomes that account for the multi-scalar problems of housing, including issues of procurement and financing, but also understand better what housing quality indicators mean to occupants. Likewise, while research into the relationship between household, home use, and housing design was essential to housing studies from the post-war period to at least the 1980s, there is a significant knowledge gap how today’s demographics and use patterns compare or if changing housing needs and household compositions are sufficiently served by current housing models.

A key question raised by this housing study is if housing standards and minimum performance requirements are an effective means to safeguard housing quality. It also points to the problem of how a minimum requirement is defined and might change over time. How then should minimum standards be determined and reasoned, and how can they be more inclusive of a wider demographic and emerging housing needs?

Analysing the spatial organisation of dwellings, this study examines the design of housing from a historical perspective, what kinds of evidence-based spatial judgments exist, and how these impact the design and provision of space in homes. The study is divided into two related themes:

Theme 1, ‘Policy and Regulation’, examines the development of housing regulations and policy over time and highlights the shift from standardised plans to space standards. It analyses how quantitative space standards are derived mainly from qualitative ideas about housing and how space standards have changed over time, producing different design outcomes.

Theme 2, ‘Housing Typologies’, studies the design evolution of London’s main housing typologies, such as terraced houses, semi-detached housing, maisonettes, and flats, but adopts a morphological classification of dwellings through their spatial organisation, number of storeys, and access type. It examines the political, economic, and cultural drivers that have shaped the design of dwellings.

Housing policy and policy instruments are historically contextual to larger external events such as the Industrial Revolution, World War I and II or climate change and technological advancements as well as new national political or economic agendas and socio-cultural transformations. 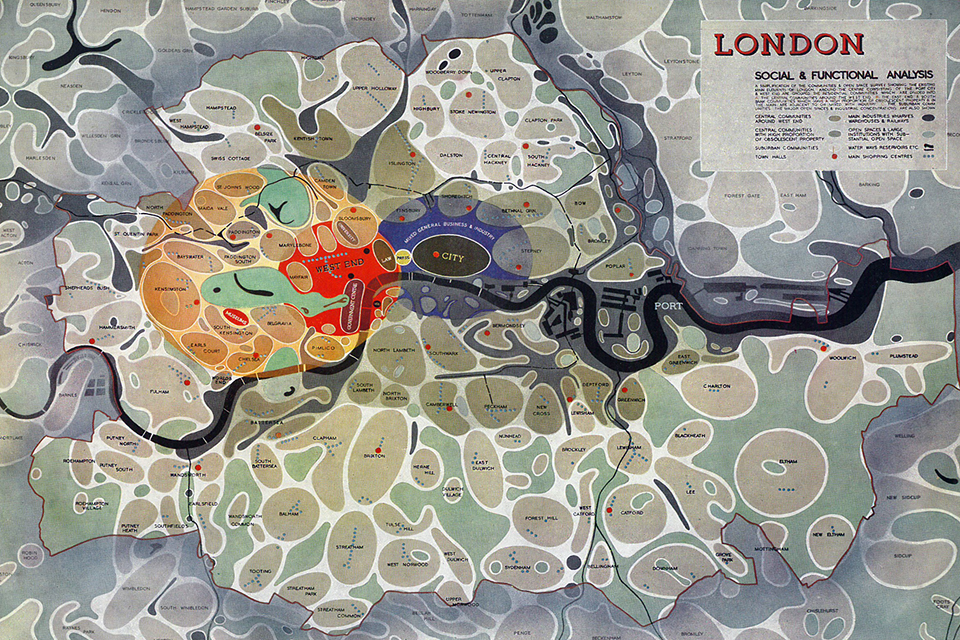 The Victorian period, concerned with public health and hygiene, based many of its housing-related policies on medical advice and health statistics. In 1917, housing evidence began to focus on technical research with the establishment of the Building Materials Research Committee. From the 1930s onwards, housing policy and planning has been increasingly based on public opinion and user data collected from occupants and housing interest groups through polls, questionnaires, and surveys, with the first English Housing Survey conducted in 1967. The Parker Morris Report (1961) is an example of the social studies that have informed housing policy and standards. Since then, housing has been widely assessed through quantitative metrics and performance requirements that no longer stipulate specific design solutions.

The needs of the working family have, since the nineteenth century, remained a key public housing concern. Housing policy and regulations have therefore been biased towards the spatial needs and organisation of the family, despite significant demographic change over the last decades. 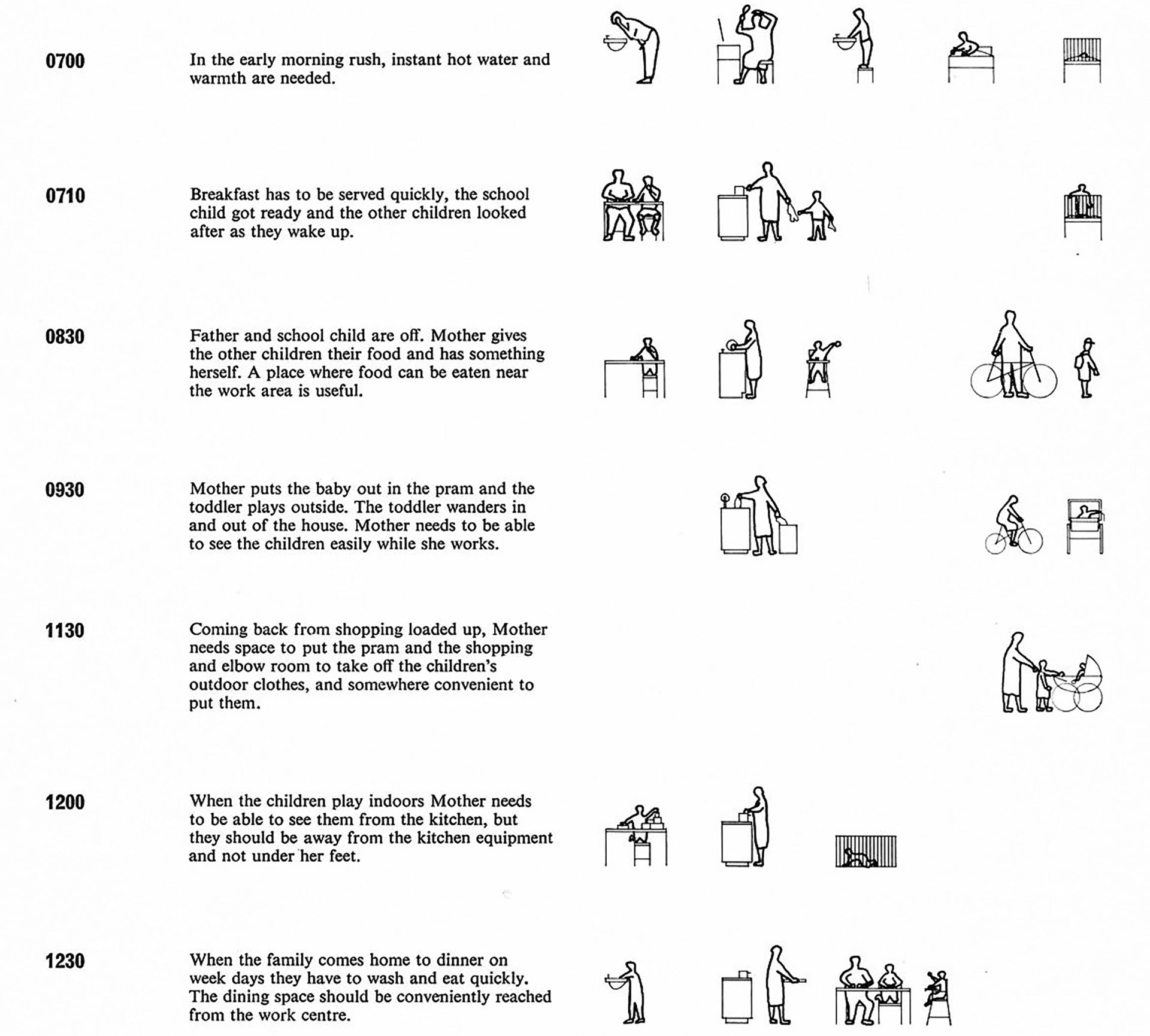 Space Standards and the Housing Stock

Space standards are the most tangible housing design controls, however, it is not always clear how they are determined and make generalisations about common user needs. As in England properties are marketed based on the number of bedrooms and not floor areas, it shows a continuing tension between socio-cultural factors, housing market dynamics, and regulatory cultures when trying to achieve policy objectives. The conflict between safeguarding space standards and usability and economic drivers of housing has led to space standards becoming a maximum, not a minimum design target.

Housing policy, standards, and design guides have historically reinforced cultural preferences for dwelling typologies, for example, the terraced house. Dwelling typologies have a specific relationship between the scale of the unit, the building, and its surrounding context and to access and circulation types. They are therefore not only determining the housing interior and its use but also the urban scale and its morphology. The transformation of dwelling typologies highlights the relationship between their layouts and a variety of social, cultural, economic, historical, technical, political, and environmental contexts. Different occupancies, building conversions, new use patterns, and user adaptations had a significant influence on dwelling layouts. 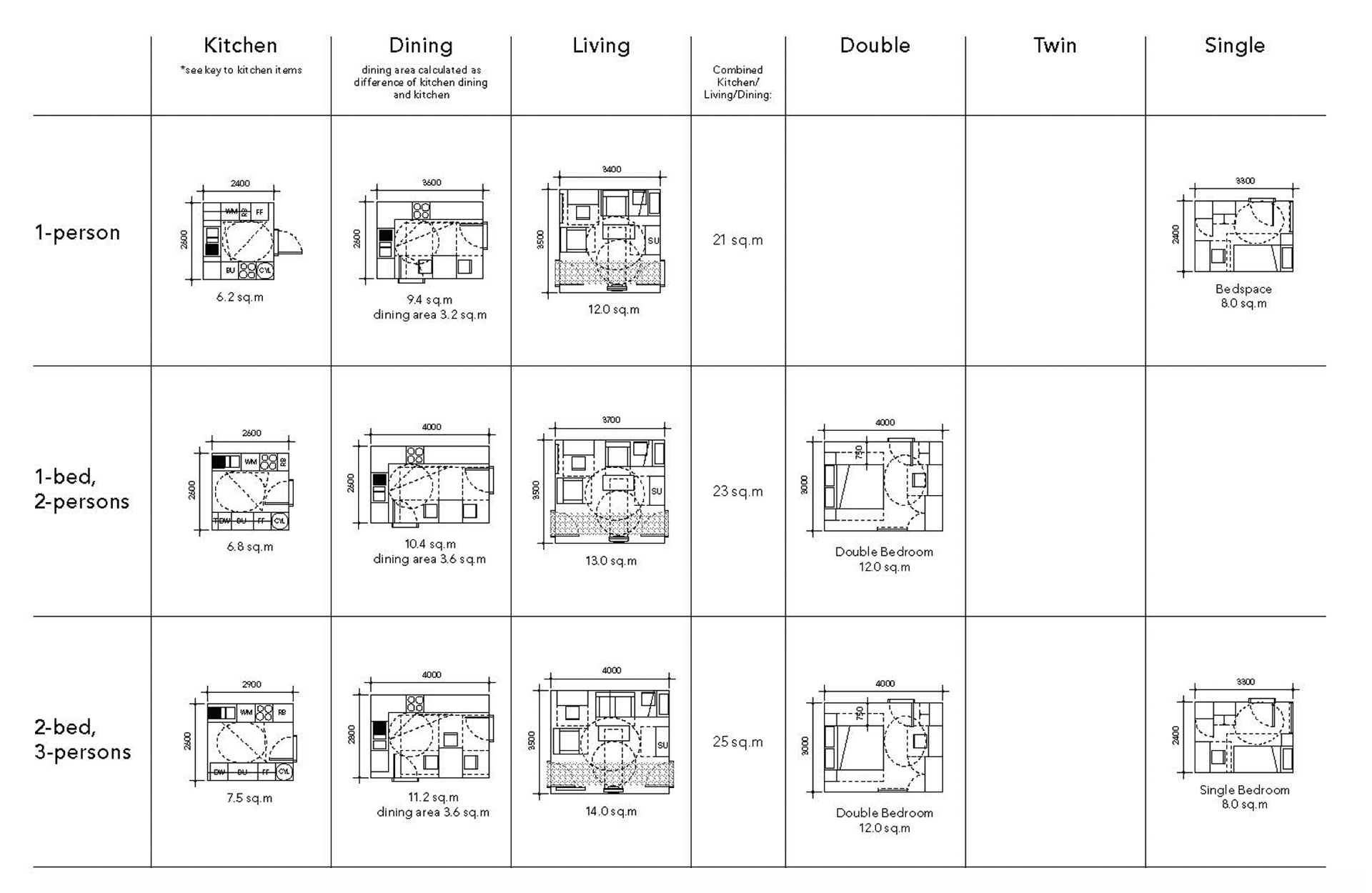 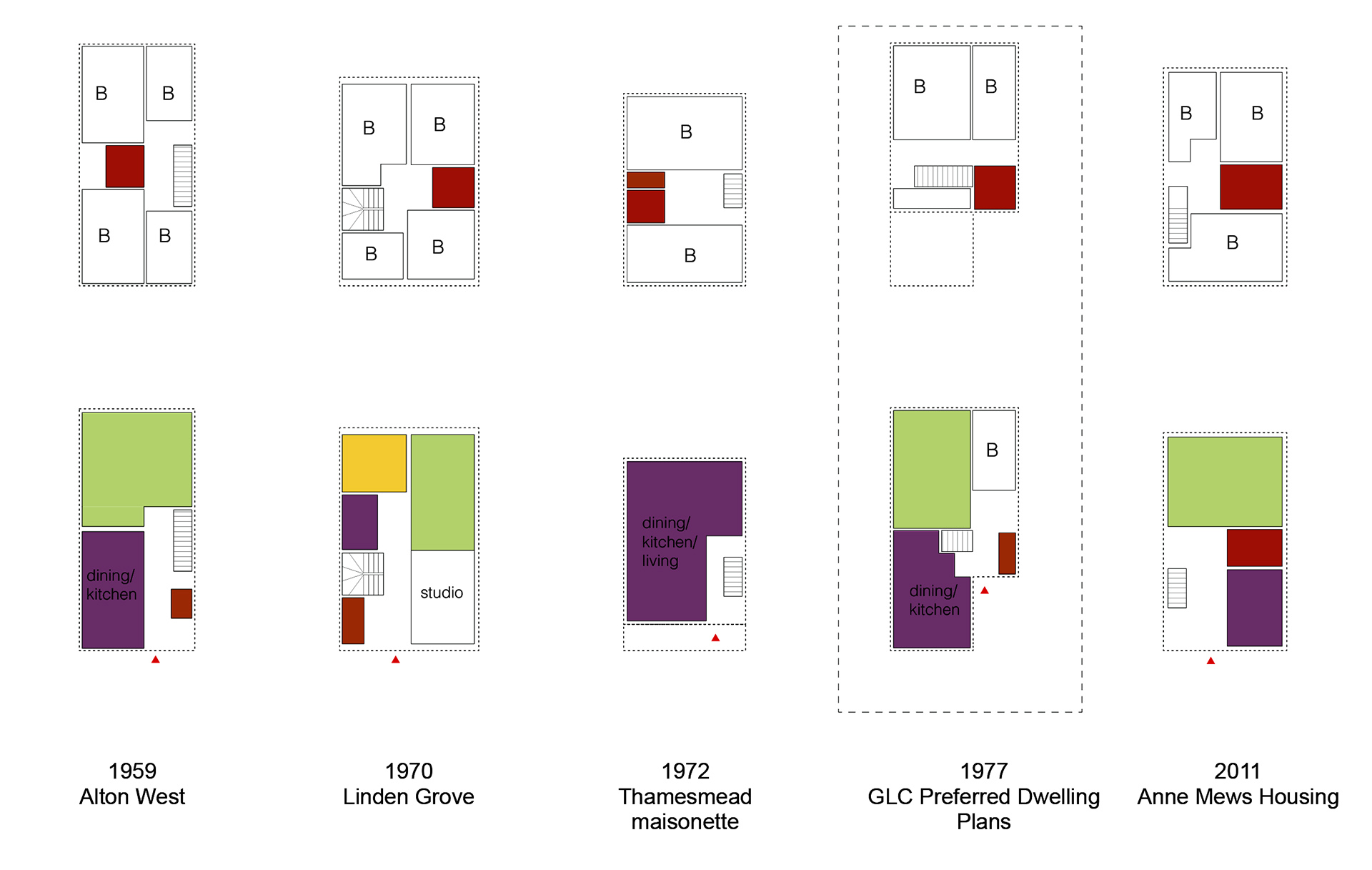 The changing design of rooms: two-storey houses and maisonettes (from 1960s) 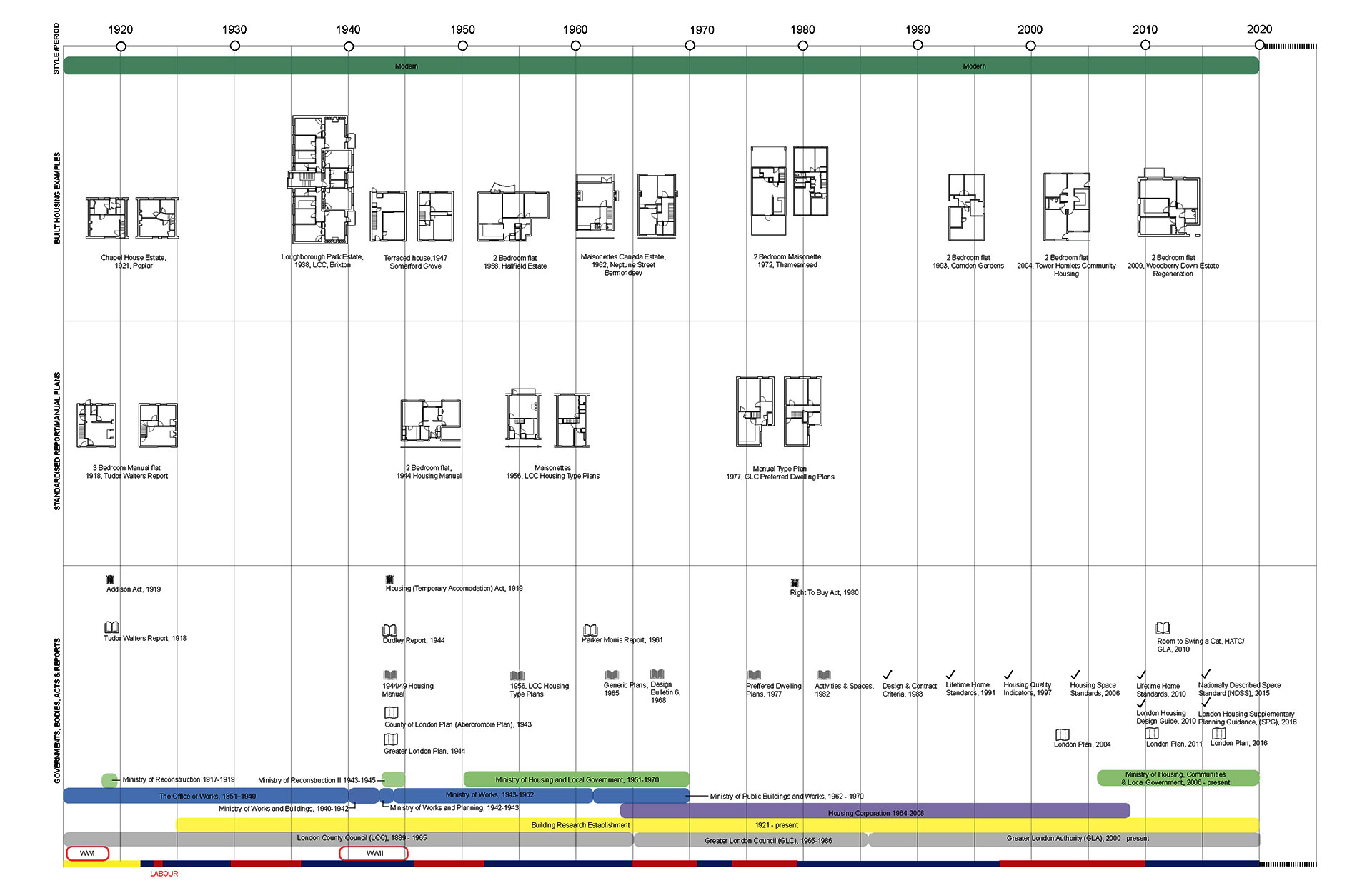 Timeline contextualising selected case studies of housing standards and regulations with built examples in London and political and institutional bodies.